1 edition of Drinking the Sea at Gaza found in the catalog. 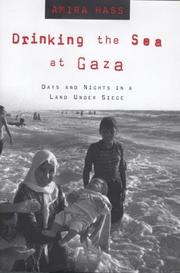 Drinking the Sea at Gaza

Days and Nights in a Land Under Siege Bears in the bath

Between hell and reason


Drinking the Sea at Gaza: Days And Nights in a Land Under Seige by Amira Hass

If you have any doubt that Israel's occupation of Gaza and the West Bank is nothing short of colonization, read this book.

She was a reporter for the Israeli newspaper, Ha'aretz, is the daughter of Holocaust survivors and a person of remarkable empathy for the dispossessed. In 1993, Amira Hass, a young Israeli reporter, drove to Gaza to cover a story-and stayed, the first journalist to live in the grim Palestinian enclave so feared and despised by most Israelis that, in the local idiom, "Go to Gaza" is another way to say "Go to hell. The barbershop, the furniture store, the grocery, another store that sold shutters, a makeshift garage — all were open at ten o'clock at night; even though they didn't expect customers, the shop owners just wanted to see what life was like after eight in the evening.

Drinking the Sea at Gaza: Days and Nights in a Land Under Siege by Amira Hass

Yet, against all odds, hope for a better future lingers. If any country in the world would treat the Jewish population under its sovereignty in the way the Israeli government behaves toward the Gazans and the Palestinians in general it would be classified as anti-semitic and the country would become a pariah state, and rightly so. Covering a range of approaches — from SF noir, to nightmarish dystopia, to high-tech farce — these stories use the blank canvas of the future to reimagine the Palestinian experience today.

As for it's being "built on rage", one might as well sniff about Solzhenitsyn's work being "built on rage" or Elie Wiesel's or Harry Wu's. But, history and the law are inconvenient to the warped Amira Hass. Although the coverage could be seen as biased, I'm not sure the events as described can really be seen any other way.